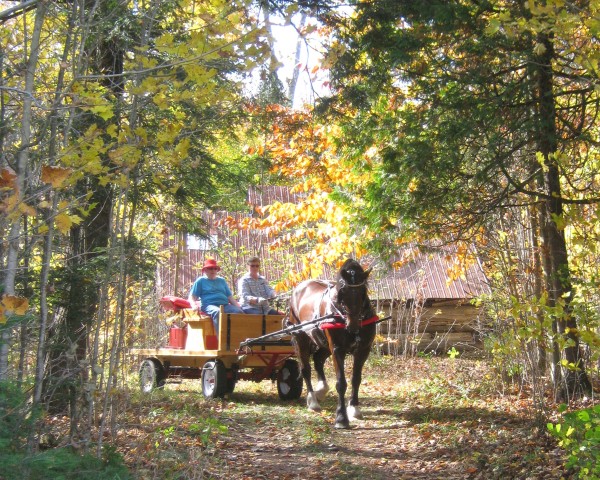 The Draft Horse Connection was a quarterly Canadian publication dedicated to the preservation and promotion of the tradition of horse farming, The unique Canadian voice of this living tradition, it was published by Ruth Freeman specifically for those interested in horse farming, work horses, history, acquiring new information about old skills or just plain connecting with others who share these interests. After 18 years of producing and publishing it,  the Connection has moved on to become part of Genesis, the magazine of Heritage Livestock Canada. With the switch, Draft Horse Connection subscribers became Heritage Livestock Canada members. The name Draft Horse Connection remains the property of Ruth Freeman as do the products in our store.

The what and the why

The Draft Horse Connection was a quarterly Canadian publication for 18 years, dedicated to the preservation and promotion of what may be the most ecological farming practice today horse farming. It was the voice of a living Canadian tradition. The magazine documented and made accessible to the public, via print, video, and learning events, the modern and historic traditions of the working horse and its cultural impact across Canada. Through informative articles and images, the publication connected like-minded people both here and abroad and served as a valuable record of the knowledge and skills of generations of people who have farmed with horses. Over the years, the Connection featured content with practical, historical, agricultural and cultural implications – modern-day and historic stories by and about people who work with horses (farmers, loggers, etc.) Lots of photographs and other visual information, such as equipment drawings  Information about the use and repair of horse drawn equipment Articles about traditional and new farming and logging techniques

How it all began

The Draft Horse Connection started as a means of sharing information with participants in the Eastern Ontario Workhorse Workshop, a teamster training program that began in 1980 and will celebrate its last year in 2002. Founding publisher Ruth Freeman was involved with the Workshop from the beginning when she accompanied her father, Aden Freeman a teamster who was teaching there. Gradually, the Workshop became something of a legend in horse farming circles and over the years Ruth evolved into its “producer,” coordinating, promoting and overseeing the entire event, which took place near Brockville, Ontario. The magazine focused primarily on horse farming and horse logging and offered readers a unique Canadian flavor (articles on Canadian equipment manufacturers, the writings of Canadian horse farming old timers, etc.) Because the Connection published nearly 100% original content, other horse-related publications regularly request permission to reprint our stories and photos. The Draft Horse Connection was without a doubt an extremely important resource for those interested in the working horse.

Few people today are familiar with the tradition of the working horse and the vital role it has always played in North American culture. The fact that this tradition is still alive is extremely important, not only for those of us who wish to follow in their grandfathers’ footsteps, but to children growing up in an increasingly high-tech world where they are far removed from knowledge about how the products they consume and use are made. So the Connection has served a dual purpose – helping a small but growing number of people (like yourself, perhaps?) to learn, apply and share knowledge and skills; and documenting that same information (that few of us can acquire from our own parents) in order to enlighten the current generation, who may one day be in a position to pass it on… and on… During its lifetime, Connection subscribers ranged in age from 10-93 years, from every walk of life, coming from across Canada, the U.S., the United Kingdom and Europe. Some retired farmers, others just starting out, from full-time horse farmers, to hobby farmers, to beginning teamsters with a dream. The common desire was to learn about and keep alive the old ways while integrating them with the new. A unique aspect of a magazine like the Connection is that many of the stories come from subscribers themselves, hence the name “connection!”